In a Standards and Pseudo Standards item in July, Holger Knublauch gripes that SQL interoperability is still tricky after all these years, and UML is still shaking out bugs, while RDF and OWL are really solid. I hope GRDDL and SPARQL will get there soon too.

At the OWL: Experiences and Directions workshop in Athens today, as the community gathered to talk about problems they see with OWL and what they'd like to add to OWL, I felt compelled to point out (using a few slides) that:

And while the OWL errata do include a repeated sentence and a missing word, there have been no substantive problems reported in the normative specifications.

How did we do that? The OWL deliverables include: 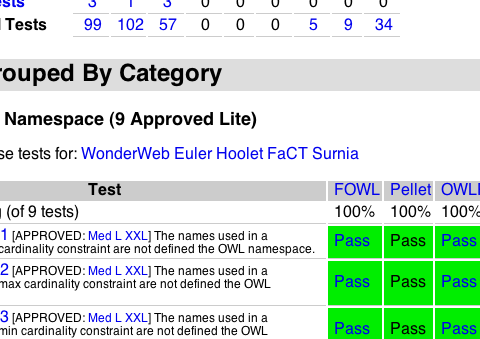 Jeremy and Jos did great work on the tests. And Sandro's approach to getting test results back from the tool developers was particularly inspired. He asked them to publish their test results as RDF data in the web. Then he provided immediate feedback in the form of an aggregate report that included updates live. After our table of test results had columns from one or two tools, several other developers came out of the woodwork and said "here are my results too." Before long we had results from a dozen or so tools and our implementation report was compelling.

The GRDDL tests are coming along nicely; Chime's message on implementation and testing shows that the spec is quite straightforward to implement, and he updated the test harness so that we should be able to support Evaluation and Report Language (EARL) soon.

SPARQL looks a bit more challenging, but I hope we start to get some solid reports from developers about the SPARQL test collection soon too.