While planning a trip to Boston/Cambridge, I was faced with a blizzard of itinerary options from American Airlines. I really wanted to overlay them all on the same map or calendar or something. I pretty much got it to work: 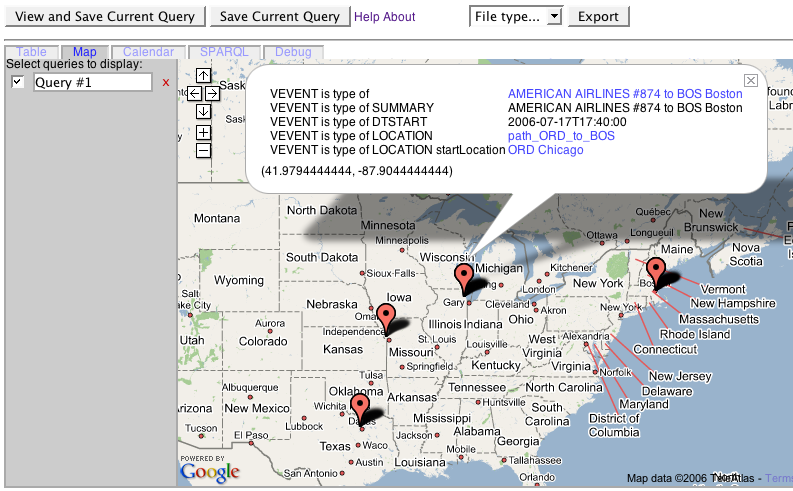 That's a map view using the tabulator, which had another release today. The itinerary data in RDF is converted from HTML via grokOptions.xsl (and tidy).

I can, in fact, see all the itineraries on the same calendar view. Getting these views to be helpful in choosing between the itineraries is going to take some more work, but this is a start.

Getting a map view required getting latitude/longitude info for the airports. I think getting Semantic Web data from Wikipedia is a promising approach. A while back, I figured out how to get lat/long data for airports from wikipedia. This week, I added a Kid template, aptinfo.kid, and I figured figured out how to serve up that data live from the DIG/CSAIL web server. For example, http://dig.csail.mit.edu/2006/wikdt/airports?iata=ORD#item is a URI for the Chicago airport, and when you GET it with HTTP, a little CGI script calls aptdata.py, which fetches the relevant page from wikipedia (using an httplib2 cache) and scrapes the lat/long and a few other details and gives them back to you in RDF. Viewed with RDF/N3 glasses, it looks like:

In particular, notice that:

The timezone info is in an rdfs:comment. I hope to refine that in future episodes. Stay tuned.