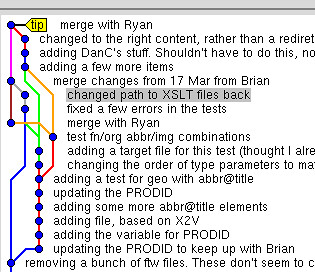 Last month at SXSWi, I met up with Ryan King and we seemed to be on the same wavelength about developing test cases for microformats. A couple weeks ago, we started using mercurial/hg to share microformats code, tests. I try to sync up with Ryan once a week or so. We had another busy day today.

We're still struggling a bit to shed our CVS habits and learn hg's push/pull/merge routine, but we're getting quite a bit of coding and testing done, as you can see in hg.microformats.org.

We talked a little about line lengths and tabs/indenting and various other open source housekeeping details.

I looked over some experimental code that Brian has added for <del> support. I simplified one big XPath expression and fixed a bug while I was at it, I think.

Earlier in the week, prompted by a #swig discussion of MicroModels, i.e. GRDDL and microformats, I collected some notes in the microformats wiki on profile URIs to reflect some discussions we had in Austin.