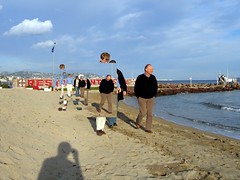 Here comes (some of) the TAG
Originally uploaded by Norm Walsh.

The last item on the agenda of the TAG meeting in France was "Reviewing what we have learned during a full week of meetings". I proposed that we do it on the beach, and it carried.

By then, the network woes of Monday and Tuesday had largely faded from memory.

I was on two of the plenary day panels. Tantek reports on one of them: Microformats voted best session at W3C Technical Plenary Day!. My presentation in that panel was on GRDDL and microformats. Jim Melton followed with his SPARQL/SQL/XQuery talk. Between the two of them, Noah Mendelsohn said he thought the Semantic Web might just be turning a corner.

My other panel presentation was Feedback loops and formal systems where I talked about UML and OWL after touching on contrast between symbolic approaches like the Semantic Web and statistical approaches like pagerank. Folksonomies are an interesting mixture of both, I suppose. Alistair took me to task for being sloppy with the term "chaotic system"; he's quiet right that complex system is the more appropriate description of the Web.

The TAG discussion of that session started with jokes about how formal systems is soporific enough without putting it right after a big French lunch. TimBL mentioned the scheme denotational semantics, and TV said that Jonathan Rees is now at Creative Commons. News to me. I spent many, many hours poring over his scheme48 code a few years back. I don't think I knew where the name came from until today: Within 48 hours we had designed and implemented a working Scheme, including read, write, byte code compiler, byte code interpreter, garbage collector, and initialization logic.

The SemWeb IG meeting on Thursday was full of fun lightning talks and cool hacks. I led a GRDDL discussion that went well, I think. The SPARQL calendar demo rocked. Great last-minute coding, Lee and Elias!

There and back again

On the return leg of my itinerary, the captain announced the cruising altitude, as usual, and then added ... which means you'll spend most of today 6 miles above the earth.

My travel checklist worked pretty well, with a few exceptions. The postcard thing isn't a habit yet. I forgot a paperback book; that was OK since I slept quite a bit on the way over and I got into the coding zone on the way back more about that later, I hope.

... and stay tuned for something from