A couple years ago, my flight to BOS for some meeting (the TP?) got me in at about 8:00 on a Tuesday night. I arrived with no plans for the evening, and couldn't scare up anything interesting to do. When I got to CSAIL/stata the next day, I found a flyer about csail hockey on Tuesdays. Darn! If only I had known!

On another trip to BOS about a year later, I managed to get out on the ice with them. The format was great: there's one group that knows what they're doing (the "B/C line"), and another group that tries not to fall down too much (the "D line"). The B/C line goes out there for 2.5 minutes and then a whistle blows and they all clear the ice, and the D line (including me) fumbles around for a 2.5 minutes, and the cycle repeats. After an hour of that, I was totally exhausted.

I was using all borrowed equipment, and I think the skates didn't fit me well.

So this time, I brought my skates. Yes, that meant trusting the airline with checked baggage, something I haven't done for years.

This trip took me to Montreal for a big W3C membership meeting and then to CSAIL for a TAG meeting. There's a rink in 1000 de La Gauchetière across the street from the meeting hotel, and I got in a couple hours on Saturday. Then during the TAG meeting lunch break on Tuesday, I did some skating at MIT Johnson ice rink. 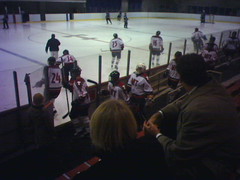 That evening, I watched the MIT varsity hockey team play a pretty exciting, high-scoring game; it ended in a 5-5 tie (see mobolg photos).

And finally, at 11pm Tuesday night, I played CSAIL pick-up hockey with my own skates. This time, there was no separation of D skaters from B/C skaters. I figured out that my main job was to get out of the way when they started skating real fast (I know from coaching little-league soccer what a waste it is for two attacking players to be taking the same lane). I think I made one or two useful defensive plays, and when the puck was passed to me a handful of times, I think I passed it to one of my team-mates more often than I gave it to the other guys.

Though I didn't feel as completely wiped out as last time, I did get a good work-out, and since the game ended around midnight and I got back to my hotel around 1am, that 7am alarm for my flight the next morning came pretty early.

tags pending: travel. Hmm... how to connect to earlier episodes: to Edinburgh for September TAG meeting, Atlanta in November for XML2005.